When you’re trying to squeeze as many conversions as you can out of a landing page, A/B testing is critical. However, a lot of startups I talked to don’t use A/B testing because it’s a lot of work. Visual Website Optimizer is hoping to take some of the pain out of setup and tracking to become “the world’s easiest A/B testing tool”. 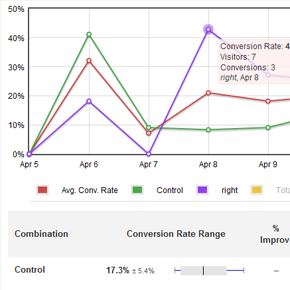 Here’s how they plan to do that:
Visual Website Optimizer is targeted to marketers who may not have technical training. Its goal is to make designing, publishing, and analyzing tests as simple as possible. VWO provides a WYSIWYG editor for creating A/B tests and it eliminates the need for tagging specific sections of the page with code to run your tests. With VWO you have to add a small snippet of code to your website once and then you are free to create an unlimited number of tests from the interface without the need to touch any more code. Their goal is allow a marketer to go from an idea to a live test in less than five minutes.

Users:
Visual Website Optimizer has 4,500 users, and is seeing healthy growth at a rate of 20% every month.

Biggest Competitor:
The 800lb gorilla in the room is Google Website Optimizer. Visual Website Optimizer believes that it’s key advantage is in its user interface. The refined simplicity of their app allows even the “non-techy” person to get up in running in no time.

One of my favorite things about VWO is that they have subscribed to the mantra of “do only one thing, but do it the best”. If you need to do A/B testing, I can’t recommend a better solution then Visual Website Optimizer.

The Huffington Post just announced that AOL has acquired it for $315 million.

The 6 year old startup started with $1 million in funding, and grew into a power house of online news.

Arianna Huffington gives some background to the deal:

There were many more meetings, back-and-forth emails, and phone calls about what our merger would mean for the two companies. Things moved very quickly. A term sheet was produced, due diligence began, and on Super Bowl Sunday the deal was signed. In fact, it was actually was signed at the Super Bowl, where Tim was hosting a group of wounded vets from the Screamin’ Eagles. It was my first Super Bowl – an incredibly exciting backdrop that mirrored my excitement about the merger and the future ahead.

By combining HuffPost with AOL’s network of sites, thriving video initiative, local focus, and international reach, we know we’ll be creating a company that can have an enormous impact, reaching a global audience on every imaginable platform.

Why everything about the modern workplace is wrong

Jason Fried from 37signals fame sits down to talk about why you can’t actually work at work. Brilliant idea about using a ping to see if someone is available or not. This allows them to answer non time critical questions when it’s most convient for them and avoid interruptions.

Would this help you “work at work”?

Get quick and easy wins. Your startup needs them.

“I worked 60 hours this week”, bragged an entrepreneur. With a wry smile his friend replied, “Well I worked 80”, as he let the word eighty hang in the air as a badge of honor I began to wonder about their teams. If you’ve ever been to a startup convention, you’ve seen this happen repeatedly.

There is nothing wrong with obsessing over your startup (in fact, if you’re not slightly obsessed, you’re probably doing it wrong), but there is danger in obsessing over the wrong things and ostracizing your team.

A founder can often work long hours because they see the big picture. At a high cognitive level, they should see the steps necessary for success. Employees can have a tougher time seeing that far so give them (significant) milestones to obsess over. This helps you to shorten the playing field for them. You’re their quarterback and you’re making the calls, it’s your job to help your team succeed. When milestones are reached you should celebrate together, after all, you are a team.

As milestone after milestone is met, you’re pushing your team closer and closer to realizing the big picture. It’s easier to sustain momentum then start from scratch. It’s the same way your car will use less gas maintaining 60mph then having to go from 0-60 repeatedly. This is just a natural law.

How have you helped your team keep momentum going strong?

Thumbtack wants to be this Generations Yellowbook

Thumbtack is essentially a marketplace for time. When you buy a service, you’re buying someone else’s time and the associated skill and effort that comes with it. People purchase services to free up some of their own time (childcare, house cleaning, etc.) and to get the benefit of expertise they don’t have (dance lessons, interior decorators, caterers, etc.). Thumbtack’s goal is to reduce the friction of these interactions.
The founder of Thumbtack, Jonathan Swanson, put it like this:

We’re aiming to create a marketplace where buyers and sellers can easily find and transact with each other. To the consumer, we offer a vetted network and ease of scheduling and paying. To the provider, we offer the support of a back office and the marketing power of having a virtual storefront that we’re bringing consumers to. Thumbtack makes money from each transaction, and from the added services we offer to providers.
Most of the services purchased today are sourced, vetted and transacted offline, but this is changing. We’ve got a big vision–we want to be the infrastructure for the local service sector as it moves online.

Work on Thumbtack began in 2008 and they launched at the end of 2009. Since Thumbtack is creating a marketplace they have two different customers — service professionals, and consumers looking for services. They spent 2010 focusing on signing up service professionals and based on results on their site, they seem to have had a positive response. Tens of thousands of professionals have already signed up all around the country.

I see Thumbtack is what the Yellowbook would have been if it was made today.

Mark Zuckerberg on the Three Keys to Facebook’s Success

Mark Zuckerberg recently sat down with The Business Insider to give insight on why Facebook succeeded.

The biggest take away from this video is Zuckerberg figured out early on out what business he was in. Facebook isn’t just a web app, it’s a social platform developers can leverage. This shift in thinking allowed Facebook’s user base to explode.

How can you apply this way of thinking to your startups?

The Art of the Start: Guy Kawasaki

Guy Kawasaki was one of Apple’s first employees, and marketed the Macintosh in 1984. This talk is based off of his book of the same title. Although a long video to watch on your computer (40 minutes), Guy has a lot of insights that you won’t want to miss. This is a must watch video for startups.

You can keep tabs on him via twitter @guyKawasaki, but be warned… he tweets nonstop.

Binpress is a marketplace for source-code where software developers can buy and sell code from each other. Binpress launched 2 months ago.

Their Story:
For the past four years the founders of Binpress, Adam Benayoun and Eran Galperin, were helping to build startups. After going through this process several times they realized there was certain things that would have to be developed over and over again. For instance, they would have to create a login system instead of working on the core app.

How it works:.
The seller on Binpress is a developer crafts an awesome piece of code that could be reused or incorporated into other projects. The buyer is another developer that is looking to get a head start on a project. It could be anything from a login script to an image manager.

Challenges:
The biggest challenge facing Binpress is the lack of code available for purchase on the site. It’s a chicken-and-egg problem. Developers would love to sell their code on Binpress, but they are going to go where the customers are (and vise versa). This is a pretty common problem for startups that have a user generated marketplace. To try and combat this problem, Binpress is running a $40,000 developer contest. I’m very curious to see what sort of influence this will have on the community.

Financing:
Currently Binpress is bootstrapped, but it will be looking to raise funds after internal milestones are hit.

Biggest Competitor:
When asked about their biggest competitor, Eran Galperin(Binpress’s CTO) mentioned Code Canyon. Code Canyon provides a similar service as Binpress, and it has been around longer. I asked Eran what made Binpress different and he replied:

That it was hard to gauge the quality of code [on Code Canyon], as well as find more heavy duty functionality (those seemed more focus on snippets and widgets). For this reason we put a lot of stock in finding and recruiting professional developers and curating all the code published on the site.

Wrap up:
Binpress has a lot of potential. I hope they are able to attract some top notch developers, it will be impossible for them to succeed without the communities involvement. Their $40,000 challenge tells me they understand this too, and they are going to do everything they can to build the best place to buy code.

Rory Sutherland gives his insight on why simple answers are better then complicated ones.

The premise of this video is not to get caught up thinking you have to spend money just because you have it. I see funded startups struggle with this quite frequently. Invest 10 minutes into this video, you won’t regret it.

What to expect from The Startup Foundry:

We will be posting 4-5 articles a day. At least one of those will be focused on a startup that hasn’t made it big yet, but we believe will soon. We love startups and want to see them succeed. This is a place where startup founders and investors can call home.

What we expect from our community: The Startup Foundry is a place where iron sharpens iron. We encourage you to jump into the comments and share your insight with the collective whole. Constructive criticism is appreciated, but trolling will get you banned. Treat others the way you would like to be treated.

The Weekly is our newsletter. Top 5 articles from the week delivered right to your mailbox. Sign up for it. You can unsubscribe with one click if you don’t want it.

The tech platforms that we are using on The Startup Foundry:

We are a member of the InfluAds network. The quality of advertisers here is incredible. You will only see one (relevant) ad on the sidebar because of this great partner.

MediaTemple has graciously offered to host our site on their (dv) platform. Setup was a snap, and I’m seeing lower pings then on my development server that sits 5 feet away from me. Incredible.

Please feel free to introduce yourself to me in the comments. I look forward to building The Startup Foundry into the premiere place for startups. All the best.