I hate getting giftcards. Rather, I hate that I have to carry a giftcard around in my already bulky wallet (unless I want to risk losing it in a random drawer at home). GiftRocket (a Y Combinator backed startup) is looking to take some of the pain out of giving, receiving, and redeeming gift cards.

I caught up with a co-founder of GiftRocket, Kapil Kale for a quick chat. In this interview we give TSF readers an inside look at what GiftRocket does, the biggest challenges they had to overcome, and their experience with Y Combinator. Don’t miss this interview!

What is GiftRocket? Who would use it, and why? 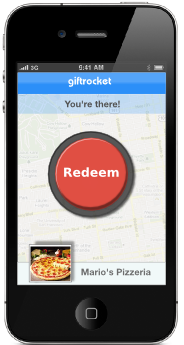 GiftRocket is the easiest way to send a gift. It’s a new type of online gift card. The way it works is that recipient of the GiftRocket checks in at a specified gift location, and receives an instant credit via PayPal.

There are two huge advantages to our service. The first is that you can pick any business on Yelp as the place to gift. It’s easier than ordering a gift certificate. The second is that delivery is instant & electronic, so it works great for friends in other cities. Want to buy your friend a gift to a cool cafe in New York? Use GiftRocket.

For example, I just sent my sister a GiftRocket one for her high school graduation to an ice cream shop across the country. I wouldn’t have been able to do that without our service.

What other sorts of challenges does your startup face

Product definition was fairly critical for us. I think that a lot of people who tried to do stuff with gifting struggled because their product was very complicated. We spent a lot of time figuring out how to simplify our product. For example, one decision we made early on was to eliminate apps and accounts from the redemption process. Yet another difficult part was explaining this entirely new service to users. We spent an immense amount of time figuring out the right language on our site.

We were defining a new space ourselves, and that was cool and fun, but made our brains hurt.

Tell us a little bit about GiftRocket’s creation story.

Nick and I quit our jobs and moved back into Nick’s family’s house in Berkeley. They were very gracious and let me stay in the guest room for four months. They kept us well fed. We converted a workbench into our office and Jonathan would come over whenever he was back visiting from grad school. Anyway, GiftRocket was born at 3am or something like that around a kitchen island.

Did GiftRocket have a smooth launch?

We had a frantic but successful launch. We launched on Demo Day. We had literally rebuilt the site’s front-end at 2am the night before TechCrunch. We also had no idea when the article would go live, so before going to bed we set Jonathan’s computer to play a sound when we got a new visitor. Then we plugged it into Nick’s speaker system, put the volume on full blast, and went to bed. At about 9am, we started hearing people sign on. Just a few drops at first and then it picked up rapidly. For large chunks of the day we weren’t even at a computer, but fortunately nothing broke. We got lots of feedback, which made launching worth doing despite the fact that we were distracted with other stuff.

How have you gained users?

The easiest way to get lots of users is to solve some sort of earth shattering-problem. That way your users just flock to you. We don’t solve an earth-shattering problem. Our challenges have largely been around marketing. Our main goal is to cut through the noise. It’s similar to some of the problems Airbnb faced early on.

You were asked to interview with Y Combinator, and when you met with PG you pitched a completely different idea. How did they handle the last minute change?

YC is pretty cool with last minute changes. They operate under the assumption that a third of the companies that they *accept* will change their ideas at some point. We were advised by Harj and YC alums to just pitch the new idea cleanly.

So the interview went something like this. PG: “So, you guys are doing local business referrals?”

Nick (my co-founder): “No, erase that from your mind. We’re doing a gift card startup.”

At one point in the interview, PG said to Paul Buchheit something like “Marketing? These guys don’t know how they’re going to market this, they’ve been working on it for what, 8 hours now?” He said it with a dash of excitement, like he thought what we were doing was just a little ballsy. We really didn’t think of it that way– we just knew we wanted to work on this idea.

Knowing what you know now, would you do YC again?

YC is a great shop. I’d say we all had a really good experience. Nick and I were both new to Silicon Valley so for us it was an instant stamp of approval on our startup, and made it really easy to connect with different companies and build out our product. The product and user acqusition feedback alone was invaluable.

We rented a “vacation home” in Mountain View maybe 1 mile away from the YC headquarters. We had a pretty absurd culture– we basically worked all day, with the exception of runs, trips to the gym, and the occassional game of Settlers. Nick’s dad would come down and drop off rations from our favorite sandwich shops in Berkeley. It seems really intense but the time flew by pretty quickly.

I’d still probably do it again for a new startup, because I believe it takes a period of super-intense work to get a startup off the ground. YC made what we did somewhat socially acceptable. I told my friends that I’d be busy for a while “hibernating” through the Winter.